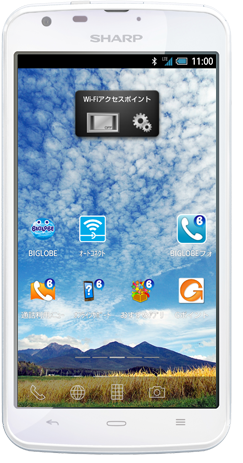 The Aquos Phone SH90B is powered by a 2600 mAh battery with Qi wireless charging and runs Android 4.2.2 - but likely a much "cleaner" version than the SH-06E.

Initially released photos show a different launcher from the now typical Feel UX. Certainly, the SH90B will not be crammed with all the rubbish software Docomo (and SoftBank) bloat their phones, quite effectively crippling their functionality.

An important stylistic difference is that the SH90B has the Sharp logo printed on top where the SH-06E has "DoCoMo Xi".

For the time being, it will only be offered in white.

You can have a look at the SH-06E description for further details on features and specifications.